When Adam and Eve ate the fruit of the tree of knowledge they did what God intended them to do, but then he punishes them for it. Does not the first story in the book of Genesis prove that religion is the mere concept of believing in God, and not the sole proof that God really exists?

In the book of Genesis of the Old Testament, the story of the creation of Earth is told, explaining that in the beginning God created the heavens and the earth. Every step is explained in minute detail, from the dark and the void to the creation of light and dark, calling the first, the day and the second, the night. “There was evening and there was morning” (Genesis, 1:1-2:7). The biblical author goes on to describe how the rest of the week is filled with creating land, and oceans, heavens, vegetation: fruit trees bearing fruit which is their seed, he explains. The author stresses that a cycle of life can begin as the tree bears its fruits, the fruit will fall to the ground and rot, the seeds within those fruits will be fertile and new trees will grow from them; animals and birds are created and made fertile so that they could multiply and become abundant on Earth; fertility being the key factor. “And God saw that it was good” (Genesis, 1:1-2:7).

On the sixth day God created man in his own image. “Male and female he created them” and blew life’s breath into their nostrils, and said to them to multiply and fill the Earth, and subdue it.

On the seventh day God rests. In Genesis 2 God goes on to create Paradise, and places man there “to work it and keep it”. He commands man to eat from all the trees except from the tree of the knowledge of good and evil” (Genesis 2). He creates rivers and rain and makes the soil fertile. But man is all alone and none of the animals or birds can help him work the garden so God goes on to create a woman from a rib of the man’s body. The woman he names Eve, and she is to help the man, Adam, with his task of working the garden. They are both naked but not ashamed.

Lets look at this objectively: one, there is a beautiful garden called Eden, two: a man and a woman are placed there, and three: everything, and I mean everything from birds, animals, plants to the man and the woman themselves pulsate with fertility, but the woman and the man are oblivious to each others desirability.

Then God inserts a conflict into the narrative; in the middle of this luscious garden there is that tree of knowledge from which they were not allowed to eat, not under any circumstances. God does not tell them why; he doesn’t tell them that they will be banished from the garden and sent to Earth if they do. And he doesn’t tell them that they will become mortal, or even what the term ‘good’ means and what ‘bad’ (Genesis, 2: 15-17), and why they were created in the first place. So what it comes down to is that they have no idea what they are risking if they were to eat its fruits, and only God’s word not to.

One day the woman notices that the tree bears beautiful fruit, and she realises that when she eats from it she will become wiser, apparently she hungers for wisdom because she ‘sins’ and eats the fruit (Genesis, 3: 6), and goes on to tempt Adam into eating it as well. At this point, she is knowledgeable, but still tempts Adam into eating it as well.

God comes into the garden and sees straight away that they have done wrong because they are ashamed of their naked bodies. Adam snitches, saying straight off that Eve tempted him into eating from the tree. To which Eve replies that the snake told her to do it. But what she is actually saying is that they’ve had sex, and that is why they are ashamed; I will explain.

In the previous paragraphs I’ve argued that God created two fertile human beings, making them different from each other so they can reproduce, giving the woman a vagina and the man a penis, the one an egg and the other seed to fertilize the egg, he gave the woman breasts to make milk in order to feed her offspring, and he gave both humans organs that give them wondrous sensations when they have sex. And then he tells them they must not use them; they may not reproduce, or become knowledgeable if you will. Maybe the snake did not tempt Eve, but Adam was the one that tempted Eve into succumbing to his manliness, blaming the snake, pretending that that part of his body is separate from him, just as some men these days still talk about that body part. And Eve did succumb to him, and became his wife instead of his worker, and in doing so became his equal, and they both recognised what love was, and that they could never abstain from sexual intercourse again.

Is this ‘not eating of the fruit’ not like locking a fox in a cage with a chicken and saying he must not eat the chicken, while knowing all along it will, because it is in its nature to do so, and like in the story of Adam and Eve, you, the creator, actually made the fox hunger for the sumptuous chicken? Maybe there was no fruit to begin with, or even a tree of knowledge, but the apple was meant as a metaphor for Eve’s desirability, and the snake for Adam’s. Who would blame them; they were alone, in a beautiful garden with luscious plants and flowers, water and rivers, a tree of knowledge.

According to the story they lost more than just their virginity, they lost their immortality. But is that a problem? I don’t think so; just like in Tennyson’s poem Memoriam, it is “Better to have loved and lost than never to have loved at all” (27), and in the case of Adam and Eve it is better to live and die, than to never have lived at all. So you could say that it is just a beautiful story trying to explain the creation of the first people on Earth.

And if you believe it to be true, that only adds to its beauty because does not everyone want to believe the most wonderful stories that are told them? 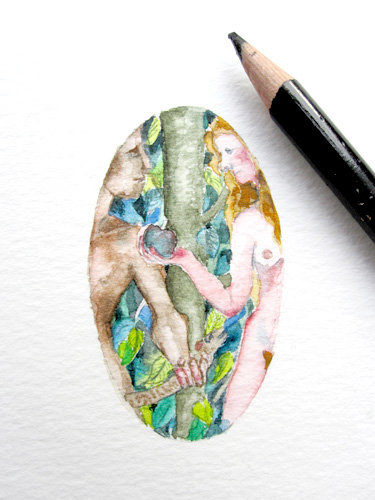 © Anita Salemink 2014. Unauthorized use and/or duplication of this material without express and written permission from this blog’s author and/or owner is strictly prohibited. Excerpts and links may be used, provided that full and clear credit is given to Anita Salemink with appropriate and specific direction to the original content.